The corner of the Hattrickaholic: Our guys on team logos

~ the hattrick comic ~ hattrick cartoon ~
In a time when teodoreh was making his way up, to be the richest "hattrick" president in Hellas (and he practically was), he asked me to draw him a logo for his team...
In his mind he pictured the "(I've Got) The Power" song, by the electronic pop group of the '90s, "Snap!".

He specifically asked for what we see in 1:39 in this video clip, and he wanted the woman to be replaced with "our guy". So it was done, and "our guy" became the model of teodoreh's team (Webtrade) logo... 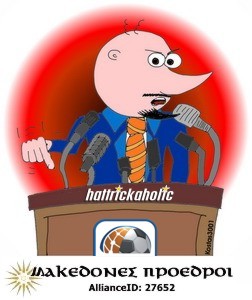 After that, an other hattrickaholics' hero became jealous, and tried his skills in modeling. He really sucked, as he was much too stressed for this job. Anyway, Kostas3001's team Sourmena VRFC hosted a similar logo with our "dummy" hero posing in it... 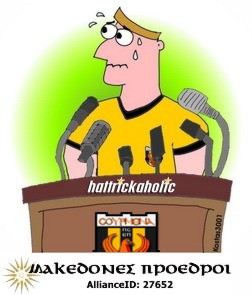 Of course that was a long time ago, when both teodoreh and Kostas3001, were both supporters in hattrick.org ...